It is 2050. The USA has just been sold to the highest bidders.

Detective Pete Shah is a Memory Association Specialist with the NYPD — he reads the last thoughts of murder victims. When he himself is arrested or murder, though, the secrets he brings to light threaten to bring the city to its knees.

The Wizard’s Tower edition of this book includes a brand new introduction from Colin’s friend and editor, Lee Harris.

“The strength of the novel lies not only in the depiction of a detailed future of hardship and privation, but in the expert characterisation of Shah: a lone figure whose origins leave him open to prejudice within the police department, and whose problematic relationship with an intersexual courtesan reveals his own deep-seated prejudices.” — Eric Brown, The Guardian

“Colin Harvey has outdone himself with creating memorable characters, a page-turning plot, and a world that is far from and somehow like our own.” — Christopher Barzak

“Damage Time is for science fiction readers who love The Wire, a gritty cop drama set in a future New York on the verge of collapse. Pete Shah is a memorable hero and the memory rip technology will make your skin crawl.” — CC Finlay 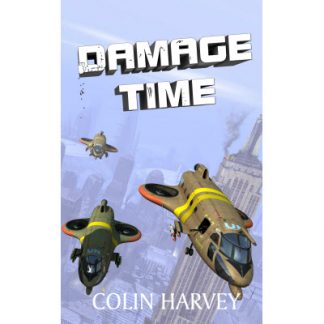