View cart “The Chronicles of the Lescari Revolution” has been added to your cart.

The Chronicles of the Lescari Revolution

The country of Lescar was carved out of the collapsing Tormalin Empire by ambitious men who all felt entitled to seize power for themselves. Now six rival dukedoms are ruled by their descendants, who all lay claim to the crown of high king. Dukes pursue their ambitions through strategic alliances and strength of arms while their duchesses plot marriages and discreet pacts.

As long as the battles stay inside Lescari borders, neighbouring powers are content to buy up whatever the dukedoms can produce and sell their rulers whatever they can afford by way of luxuries or necessities. Amoral opportunists come from far and wide to seek their fortunes in the mercenary bands who ride the successive tides of warfare.

All the while the ordinary people struggle to raise their crops and families amid the turns and chances of uncaring uncertainty. Many leave, preferring to live abroad as exiles, poorer but safer. Those who can afford to send whatever coin they can spare back to family and friends still labouring to pay the dues and levies that the dukes demand.

Now a mismatched band of exiles and rebels are agreed that the time has come for change. Can a small group, however determined, put an end to generations of intractable misery? Perhaps. After all, a few stones falling in the right place can set a landslide in motion. But who can predict what the consequences will be, when all the dust has settled?

Thanks to a clearance sale by author, Juliet E. McKenna, we are able to offer the entire trilogy as a set at a knock-down price. Please note that the first volume, Irons in the Fire, is a mass market paperback, while the other two books — Blood in the Water and Banners in the Wind — are larger trade paperbacks.

Ebook copies of these books are not available as Wizard’s Tower does not own the rights to them. 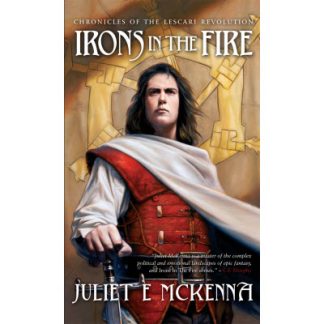 You're viewing: The Chronicles of the Lescari Revolution £5.00
Add to cart